A Case Study With Avalign Technologies

Avalign produces and supplies surgical implants, instruments, and delivery systems for the healthcare industry. It handles the entire development process in-house, from conception to launch. With facilities across the United States and Europe, the company’s vision is to improve patient outcomes by providing best-in-class medical equipment.

To achieve its goals, Avalign needed to increase throughput, reduce downtime, and improve equipment utilization and OEE by gaining complete control of its machine and operational data.

Like many manufacturers trying to get a grip on their data, Avalign used a manual tracking system. Operators felt that manual tracking was one of the worst aspects of the job, and management knew that manually collected data was unreliable and inaccurate.

Avalign believed that with real-time, accurate machine data insights, management could better understand machine utilization against the quality and quantity of parts produced during cycles.

Avalign rolled out MachineMetrics on 16 machines, including grinding machines and lathes. Over time, they seamlessly integrated the platform on 132 more machines across four facilities in the United States.

MachineMetrics' Digital IO approach was a game-changer for older machines and legacy assets. Legacy machines were up and running with MachineMetrics in less than an hour.

At the organizational level, MachineMetrics revealed that the company was understaffed. This led to Avalign hiring more operators and creating new schedules to optimize operational processes.

Visibility of the production process enabled Avalign to identify improvement initiatives that impacted utilization. Real-time, actionable insights drove a dramatic downtime reduction and resulted in a savings of 14,000 hours on grinders alone compared to the previous year.

Monitoring the operations of lathe machines and grinders ensured they were working at optimal capacity within three shifts for five to six days a week. Pre-MachineMetrics, Avalign averaged an OEE of 25 to 30% with calculations done manually. Within five weeks of deploying MachineMetrics, OEE improved to 44%.

Since then, Avalign's OEE has been above the 60% mark, meaning a greater than 30% increase in equipment utilization, and it regularly hits the 80% OEE mark weekly. 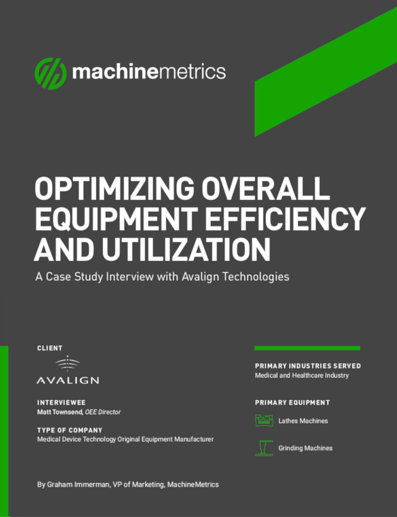 Optimizing Overall Equipment Efficiency and Utilization
Ready to Connect Your Shop Floor?
EXPERIENCE THE DIFFERENCE FOR YOURSELF.
Book a Demo
Get In Touch With Us