Carlson Products is a major supplier of formed and fabricated component parts and finished aluminum products for commercial bakeware, industrial, doors, and restaurant leaders throughout the U.S. and abroad. On the heels of a new ERP integration, Carlson knew that the right data could empower its success.

Attempts to manually track data were previously unsuccessful and led to what the company called "junk data." Carlson had previously focused on historical labor data to understand its productivity and identify why jobs weren’t on target. However, tracking down supervisors and operators for relevant data was time-consuming.

Carlson's most significant challenge was overcoming the hurdle of manual data tracking. Employees had difficulty remembering why problems occurred, and the company couldn’t identify which issues were systemic and which were one-offs. This lack of visibility made it difficult to calculate actual machine utilization and potential capacity.

While Carlson's new ERP system was beneficial, it wasn’t updated in real time. Managers could see what happened yesterday or last week but not what was currently happening on the shop floor. As a result, process improvements were based on outdated information.

The company also experienced the error-prone tendencies of manual data entry and understood the dangers of acting on unreliable data.

Carlson approached MachineMetrics after looking at several other vendor options. Most competitor solutions felt rudimentary and weren’t visually appealing or web-based. The company had also seen demonstrations from systems that work in machining, but none were adaptable to the sheet metal industry. Carlson quickly realized that MachineMetrics was their solution.

As a pilot, tablets were mounted to 15 machines to display job performance and provide operators with an interface that categorized downtime, setups, part rejections, and tool changes. Real-time dashboards were installed on large screen monitors across the facility to display the performance of jobs against the company's production goals. Instant text notifications were set up so Production Managers could identify underperforming machines and address issues in real time.

MachineMetrics was a helpful resource for importing data into Carlson’s ERP. The company now uses MachineMetrics as a check and balance tool to verify or change bad data that enters the ERP from other sources.

Upon installing MachineMetrics, Carlson realized an instant bump in efficiency. As the rollout matured and more machines were added, it realized a 10% gain in overall efficiency and drove additional process improvements.

As efficiency, productivity, and quality improved, Carlson realized 1,200 additional machine hours per month in added capacity, translating into 14,400 extra hours a year. This added capacity meant that the company could take on more jobs than ever. It also meant that it could forecast capacity more accurately.

Since adding MachineMetrics, Carlson's billings have increased by more than $288,000 annually. The company has also used data-driven insights to incentivize employee performance, something it wouldn’t have been able to implement without MachineMetrics.

Accurate, real-time data has helped Carlson understand its true capabilities at the machine level. Because of this, the company has become more discriminating in its jobs, passing on those that exceed their capabilities – a situation they wouldn’t have anticipated before deploying MachineMetrics.

MachineMetrics enabled Carlson to reach its goals and overcome its most significant challenges. With increased efficiency, a higher number of available capacity hours, and significantly improved billings, the company realized an ROI in just 30 days.

Learn how Carlson experienced a 24% increase in machine utilization and achieved ROI in less than 30 days. 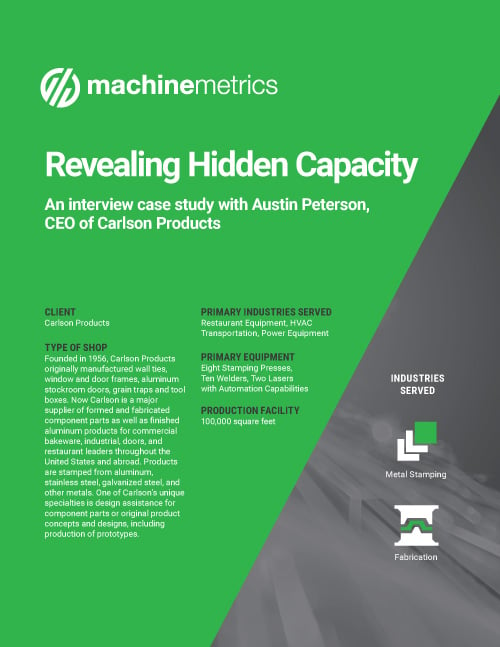