Connecting to Machine Tools With Umati

Umati, which stands for Universal Machine Technology Interface, is a community of machine builders and machine tool industry professionals promoting the adoption of open, standardized interfaces based on OPC-UA.

Umati enables the connectivity of machinery and components to IT systems easily, securely, and seamlessly.

Human-machine interfaces (HMIs) are a hallmark of advanced platforms and have become more advanced, intuitive, and user-friendly in manufacturing environments. The dashboards used in HMIs are also available via tablets, PCs, display boards, and other systems, either remotely or throughout the facility.

Umati's attempt to standardize interfaces means that systems can exchange data between machines and components more efficiently. It also allows users to integrate Umati interfaces into their IT system or cloud-based machine data platform. 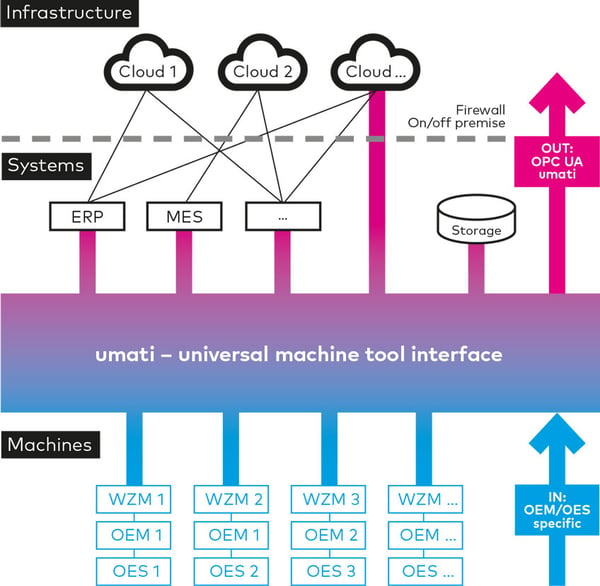 Why is Umati's Growth in Interface Programming Important?

Traditionally, as OEMs developed automation capability within their equipment, many chose the route of closed-loop ecosystems to tie buyers to a single equipment brand. This path was more expensive and less effective as not every company could afford automation products within the OEM's offerings.

These systems were closed-loop, often with proprietary software. The equipment either couldn’t communicate with other systems or, if it did, it required additional IT support or programming.

As smart factories become the norm rather than the outlier, companies began to develop more advanced solutions to accommodate different OEMs, varied generations of machines, connections to robotics, sensor controls for single action tasks, and more.

With so many players and options in the machine automation space, a common language was needed. Advanced machine data platforms like MachineMetrics had already proven their value over traditional closed-loop ecosystems.

Umati was developed as an open-source development tool for creating standardized and secure interfaces. Standardized data exchange between systems meant that the power of cloud-based analytics could be realized across a factory without siloed data or proprietary automation controls preventing linkage to the machine data platform.

How Is Umati Linked to OPC-UA?

Umati is based on the Open Platform Communications User Architecture (OPC-UA), a robust communication platform developers use to enable communication between different industrial devices.

OPC-UA was developed to address machine automation advancements and improve system capabilities like advanced machine data platforms. The benefits of using OPC-UA as a companion to Umati programming and standardization include:

Umati developments are based on OPC-UA capabilities. However, Umati further enables specific mapping for both customers and manufacturers. It also uses a standardized configuration for the transformation of parameters.

Extensions of OPC-UA capabilities achieved by Umati include: 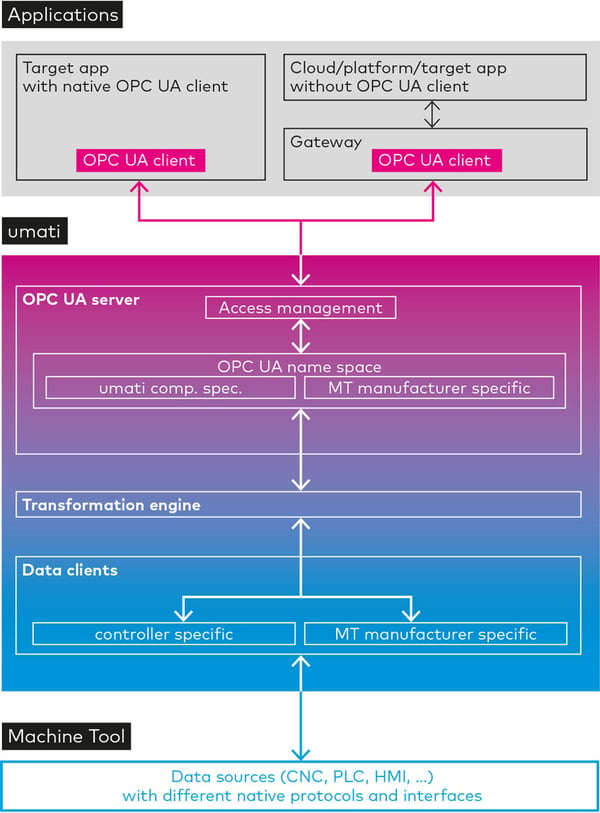 Yes. Umati is an open-source tool and requires no license for development.

Who are the Umati partners?

Umati is made up of many, many partners that include machine builders, software providers, and other key manufacturing industry professionals.

This working group "support the dissemination of OPC UA standards with a common implementation in the machinery industries."

As documented on the Umati website, there are several types of partners:

Some of these partners include machine tool providers, such Citizen, Fanuc, Heidenhain, Mazak, Mitsubishi, and Okuma.

Every new industry converges toward standardization. From operating systems to common data transfer hardware like USBs, standardization enables innovation that triggers greater efficiency and use of resources.

The goal of Umati is to work toward a plug-and play-solution so interface components can be used across any industry and communication is standardized and recognizable among equipment. This goal allows for the development of stabilized processes within a manufacturing environment and a continuous flow throughout any production line, as components are interchangeable.

How Do I Connect to Umati?

As device and interface manufacturers move to Umati, their products will have Umati built in. However, some equipment, like CNC machinery, may have standards like MTConnect embedded. In some cases, Umati may require a protocol adapter.

How Do I Ensure Connectivity to All Equipment?

You can easily connect to, and collect data from all your devices for complete operational visibility.

Want to see the platform in action? Book a Demo Today.

Collecting machine performance and health data is now fast, simple, and scalable. Easily connect to any make and model of equipment to autonomously collect and standardize data, drive actionable insights, and enable automation.
Book A Demo CONNECTIVITY HUB
Get In Touch With Us