I/O modules are a key component of industrial networking, ensuring connectivity and control of systems, processes, and devices. Ensure data collection from peripheral devices and legacy equipment that is not compatible with desired industrial protocols.

What is an I/O Module?

Input/Output Modules, or I/O Modules, manage the communication between a CPU and a network, including the transfer of data, the management of power loads, and the control of machine functions.

This enables system integrators to connect disparate devices, allowing greater control of the industrial network. I/O modules are especially helpful in instances where there exists legacy machinery, devices, and systems that are unable to natively communicate with a desired industrial protocol.

I/O modules help to extend a manufacturer's network to incorporate all manufacturing equipment, enabling greater control of the system as well as increased operational visibility. They also overcome the challenge of collecting peripheral data, which can come in various amounts, at different speeds, and in varying formats.

Some of the devices from which data can be collected using an I/O module include sensors, actuators, monitors, and valves. I/O modules can also work as accessory devices for PLCs and HMIs.

What are the Core Functions of an I/O Module?

I/O modules offer a variety of key functions within an industrial environment. Without Input/Output modules, organizations would be unable to exchange data between peripheral devices and their network. Below we outline the critical functionality of I/O modules:

What are the Different Types of I/O Communication Techniques?

There are three types of I/O communication techniques:

What are the 3 Categories of Input/Output?

There are three types of I/O operations:

What is the Role of I/O Modules in PLCs?

I/O modules exist within PLCs or can be added to PLCs to increase functionality, connectivity, and control of processes. They play an important role by processing communication that is sent to the PLC as well as accepting commands sent by processors. This enables them to detect errors, exchange data, buffer data, and manage data transactions between internal systems and peripheral devices.

What is the Difference Between Analog and Digital I/O?

Analog and Digital I/O refer to the type of signal being transmitted between devices and systems within an I/O operation.

Analog signals are continuous in both the value they represent and the time they correspond to. A good example to think of is a sound wave, which represents a continuous measurement of sounds over time. Other examples could be current or voltage.

Digital signals are binary. Think “On” or “Off”, “1” or “0.” In this regard, they are discrete, rather than continuous, like analog signals. With the prevalence of digital technology, digital I/O is overtaking Analog I/O as the standard to collect data. However, analog is still in use and can be converted to digital signals as well.

What is the Structure of an I/O Module?

Below you can find a diagram that includes all the components within an I/O module. 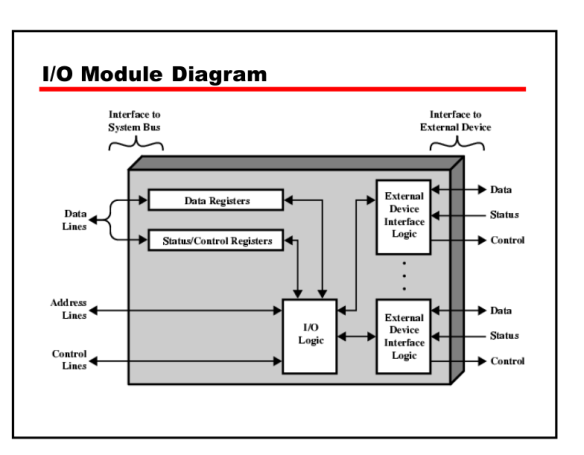 How Do I Ensure Connectivity to All Equipment?

Whether the equipment is compatible with widely adopted industrial protocols or not, you can easily connect and collect data across all your devices for complete operational visibility.

Want to see the platform in action? Book a Demo Today.

Collecting machine performance and health data is now fast, simple, and scalable. Easily connect to any make and model of equipment to autonomously collect and standardize data, drive actionable insights, and enable automation.
Book A Demo CONNECTIVITY HUB
Get In Touch With Us