Tackling Complex Automotive Manufacturing Problems With IIoT Automotive manufacturing must stay nimble to satiate the demands of a dynamic market. Operational challenges will continue to abound in a

Below is what we will cover in this in-depth article on edge computing in manufacturing. Select a link if you would like to jump to a particular section: An Introduction to Edge Computing in
START DRIVING DECISIONS WITH MACHINE DATA. 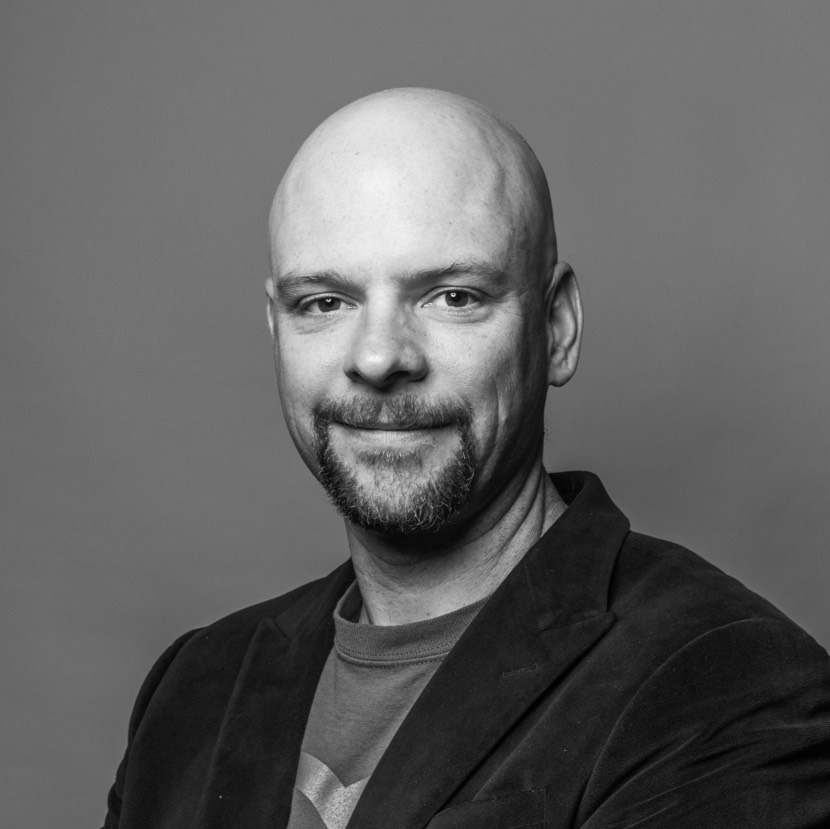 Usually it's the squeaky wheel that gets the grease, however the squeaky wheel isn't always the source of the problem. A Pareto chart is a graphical tool that allows manufacturers to identify the most significant problems across the shop floor using quantifiable data. It often identifies the top few issues that cause 80% of the pain. Continuous Improvement leaders use these charts to focus on the group of problems causing the most machine downtime or quality issues. Vilfredo Pareto, an Italian economist, developed the Pareto Principle, also knows as the 80-20 rule. which means that 80% of the effects come from 20% of the causes. These charts are simple to read and useful, however can be very difficult to produce the data. 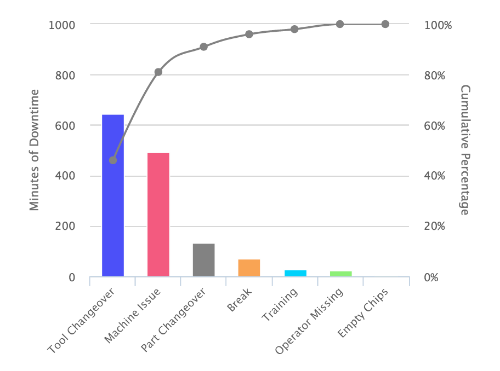 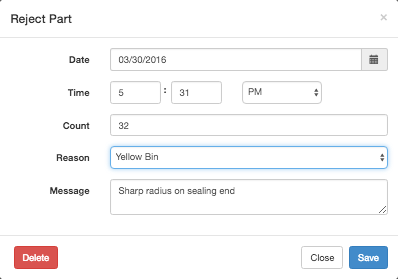 The unplanned downtime Pareto is difficult to produce. It requires understanding all downtime that occurs on a machine. Traditionally, obtaining the necessary data involves log sheets that require the operator to manually log all significant downtime. This manual approach will likely miss frequent downtime events that are only a few minutes each, but add up to a significant amount of time. Typically the actual data is logged well after the incident occurs, so the time is not very accurate. A machine monitoring system that tracks the cycle status of a machine in real-time is necessary to generate data for a downtime Pareto. It's also necessary for the operator to categorize each downtime event into reasonable buckets during or shortly after an event.

MachineMetrics was designed to give operators an easy tablet or web interface that prompts the operator when the machine goes down to categorize downtime. All the operator has to do is tap the screen for a reason, and move on.  When the machine first goes down, the operator is prompted to enter the reason, but it's optional an unobtrusive. It looks like this and requires one tap to show the options, and a second tap to select the reason. Once the downtime exceeds 5 minutes, the options appear over the rest of the view, encouraging the operator to enter a reason. 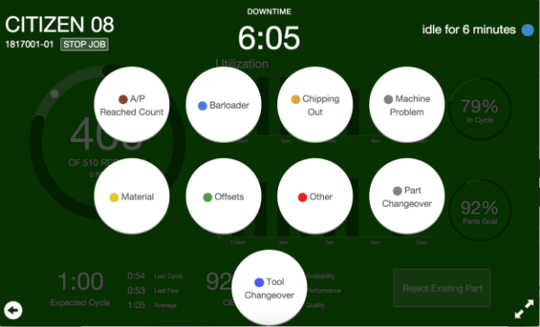 For some downtime events, such as a setup that has taken too long or a tool change that occurs during or near the time the machine reports a tool life warning, MachineMetrics will automatically categorize downtime and operator input is not required.

We recorded a video which better demonstrates how this works. It shows how downtime is categorized, but also how the Pareto can be used to drill down into further categorizing downtime events that have occurred in the past. 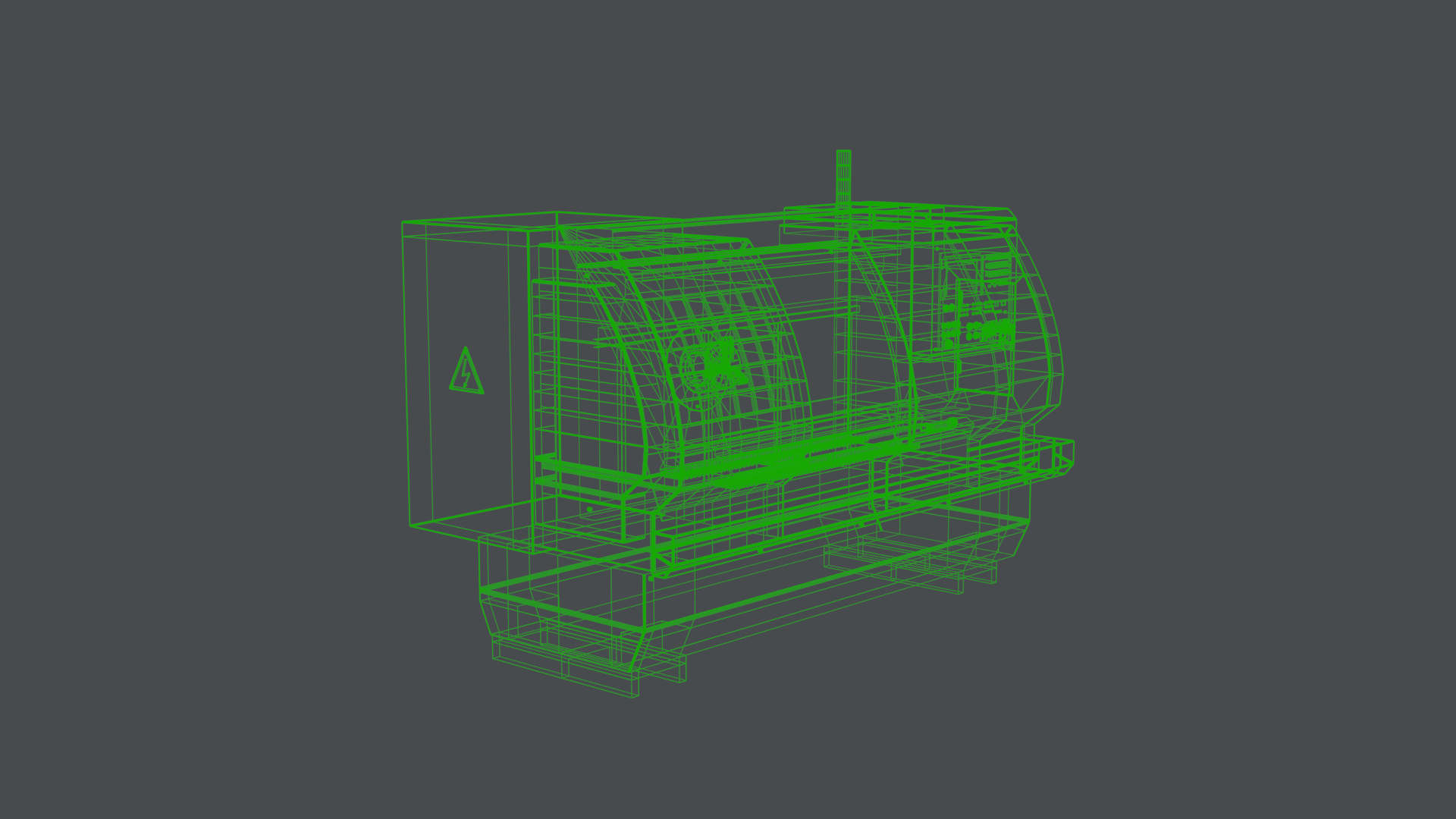 Data Driven Manufacturing: Benefits, Challenges,...
Optimizing Production Efficiency through Data-Driven Manufacturing Strategies Although diverse data capturing technologies exist, manufacturers still struggle to use them. It's due to this major challenge that the goal of data-driven manufacturing seems all the more unachievable.  However, there are a few data driven approaches you can take when optimizing production efficiency. These approaches include making use of Industrial IoT to...
machinemetricsmanufacturing-datamanufacturing-analytics / February 11, 2016 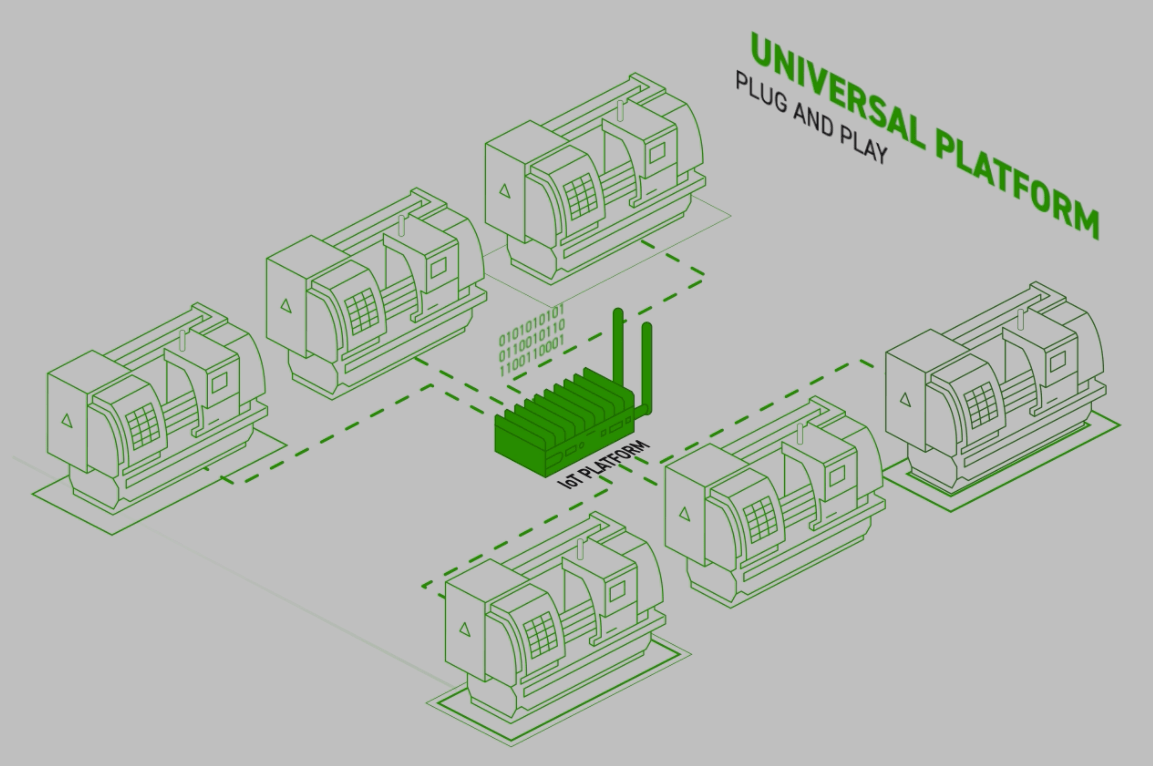 MES vs. IIoT Platform: Why Not Both?
Is an MES or IIoT Platform (or Both) the Best Option for You? The increasing use of industrial automation in process and discrete manufacturing facilities have put the manufacturing execution system (MES) market in a transitional period.  On one hand, the MES market is expected to grow in value to approximately $23 billion by 2024. On the other hand, emerging solutions such as IIoT platforms, cloud-based automation solutions, and SaaS...
iiotmachinemetricsmes / February 11, 2016 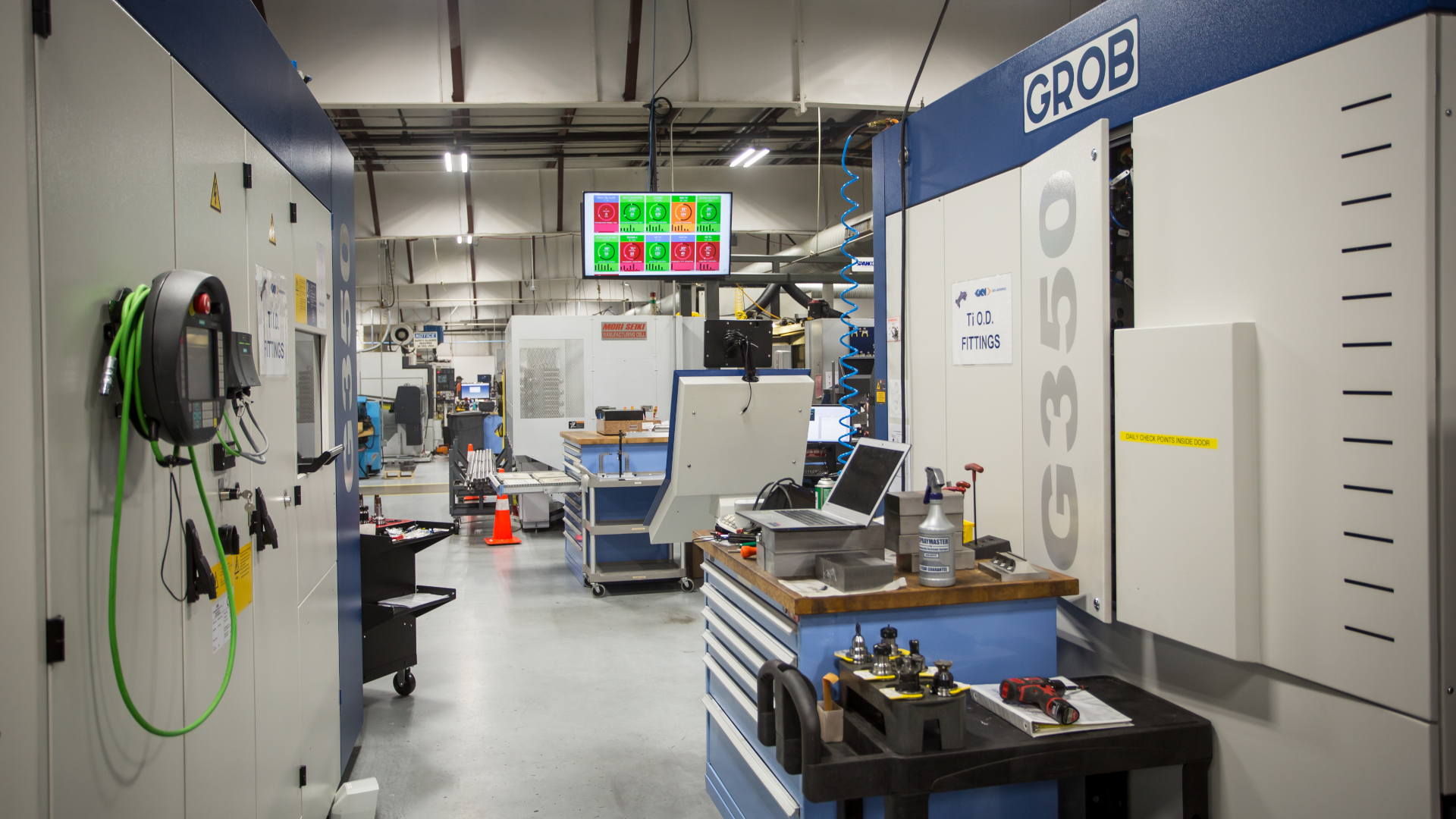 A Long-Term Strategy for Manufacturers Adopting...
It’s not uncommon for a factory to operate several generations of the same type of production equipment within a single factory. Except for extremely large companies with very deep pockets, most companies can’t afford to retool very often and must add their equipment in segments based on a long-term capital plan and in accordance with their growth strategy for their business. This method of investing and long-term planning isn’t seen...
machinemetricsindustry-4-0 / February 11, 2016 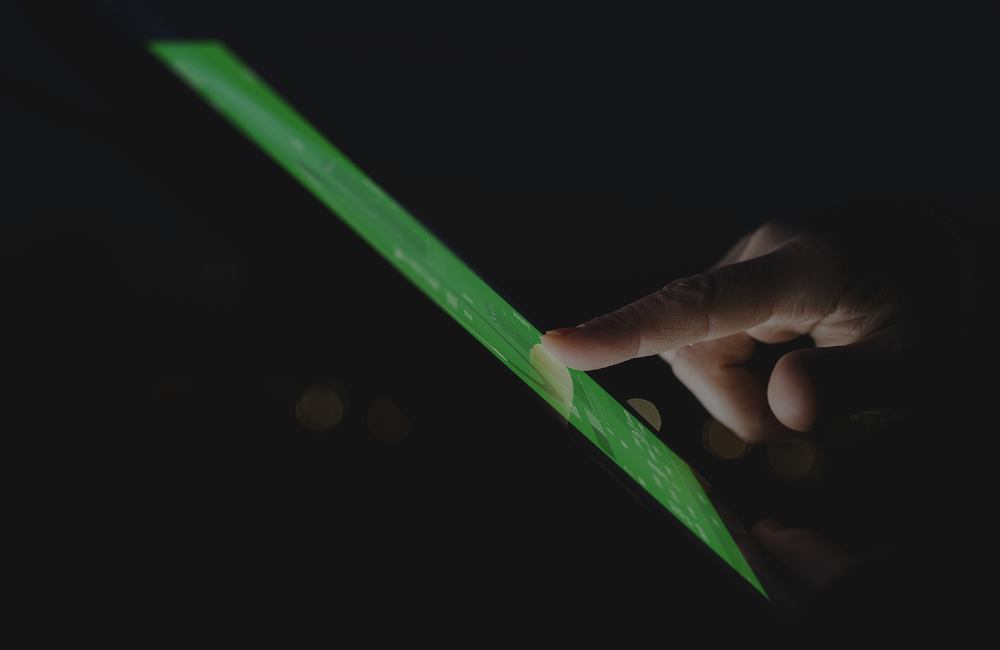 MachineMetrics, World Economic Forum Join Forces...
Boston, MA -- MachineMetrics, a leading data and digital app platform for manufacturing, today announced that it has joined the World Economic Forum’s Global Innovators Community, a group of the world’s most promising start-ups and scale-ups that are at the forefront of technological and business model innovation, to engage with public and private sector leaders and to contribute new solutions to overcome the current crisis and enable...
machinemetricsstrategic-partnerships / February 11, 2016 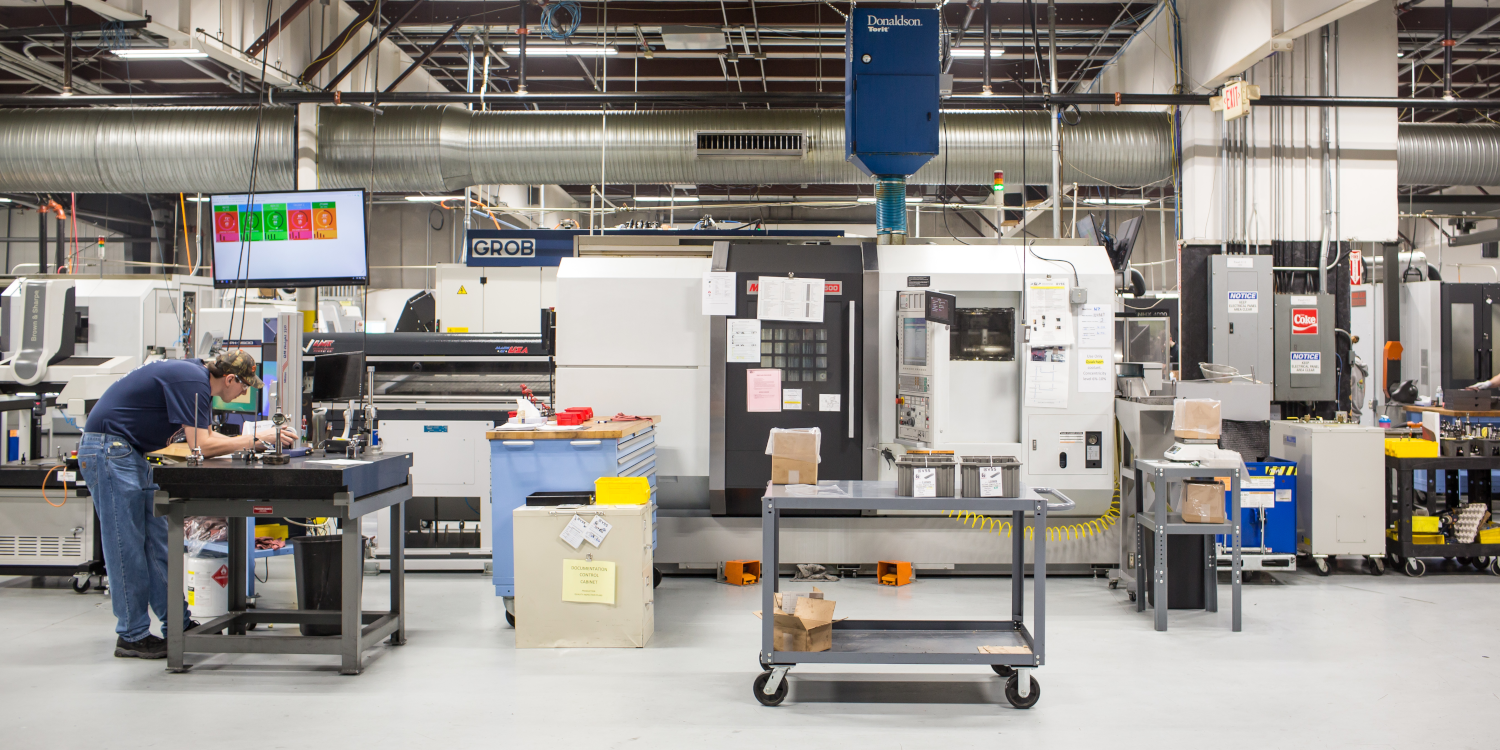 The Downside to Do-It-Yourself IoT
The digital transformation of industrial production enterprises relies on the internet of things (IoT) for connectivity, visibility, and deeper insight into performance. And although the success of Industrial IIoT within manufacturing is accelerating revenue growth, challenges relating to cybersecurity, high investment costs, and implementation still exist. These challenges have led many manufacturers to turn to DIY IIoT with the aim...
iiotmachinemetrics / February 11, 2016

5 Steps to Bring Your Legacy Systems Online with...
The move to industry 4.0 will be defined by how effectively legacy systems and assets within shop floors are integrated into online or cloud platforms. This is because a large percentage of enterprises still rely on legacy systems and equipment to meet production needs. A study showed that 76% of decision-makers admit that legacy systems keep their data trapped, which greatly hinders automation and operational efficiency. By bringing...
industrial-iotmachinemetrics / February 11, 2016 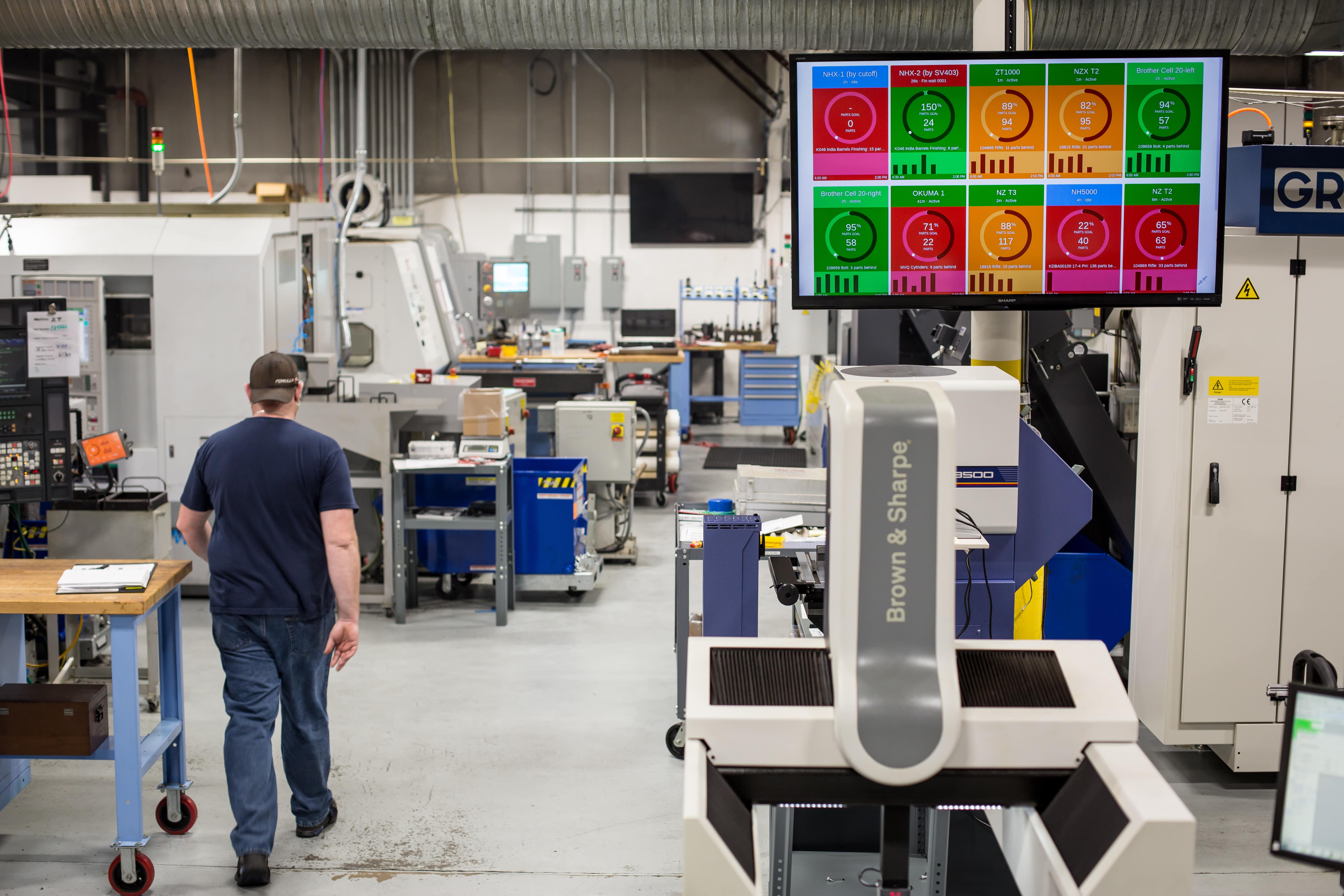 Finding the Payback for Smart Manufacturing
Industry 4.0 is defined by smart manufacturing processes such as data-driven plant optimization, industrial automation, and predictive maintenance. Since these processes rely on shop floor data, configuring a smart or lights-out facility starts with setting up an effective data collection system. This data collection system represents an investment for the manufacturer, in which they will expect a return. The assessment of the...
machinemetricssmart-manufacturing / February 11, 2016

The Impact of COVID-19 on Manufacturing - From...
A Bird's Eye View As we round out Week 12 of quarantine, many of us are wondering — when will this be over? It’s looking more and more like the effects of coronavirus are here with us to stay, until an effective vaccine can be manufactured en-masse. As universities and labs continue to publish research on this new virus, it’s becoming increasingly clear to us that even though most cases are mild, the spread and severity of a novel...
machinemetricsdata-science / February 11, 2016
See All Posts
Popular
8 Wastes of Lean Manufacturing | MachineMetrics
OEE, OOE, and TEEP - What's the difference?
The Real Cost of Downtime in Manufacturing
Why Industry 4.0 is important
Industry 4.0 advantages and disadvantages
Categories