Kepware vs. MachineMetrics: What’s the Better Solution for...

Kepware has long been synonymous with industrial connectivity. Having been founded in the mid-1990’s, they have successfully helped connect a large variety of industrial equipment across a wide range

Yes, You Really Are Ready for Industry 4.0: Here’s Why

Over the past few years, there have been many significant changes in the manufacturing industry. From a global pandemic to supply chain issues to worker shortages, challenges have never been greater.

Recently, I had the chance to host a panel at IIoT World’s Digital Manufacturing Day with technology leaders from Fulcrum, UpKeep, and MachineMetrics. During the panel, titled The Death of MES: A New

With labor, transportation, and material costs rising in every manufacturing sector, companies are anxious to find ways to save money. For CNC machining, tooling is an additional, often unforeseen,
START DRIVING DECISIONS WITH MACHINE DATA.

The Massachusetts TechHUB Caucus hosted its 3rd marquee Innovation Day today, an event
which brought 200-plus attendees to the State House to discuss "Megatrends and the Future of Tech in Massachusetts". The Caucus also recognized the contributions of leading tech innovators with an inaugural round of NextGEN Awards, recognizing tech firms and organizations that are leading and innovating in their field and contributing to the Massachusetts tech economy for the next generation. The MachineMetrics team was on-hand not only as an exhibitor of our platform but as one of six companies chosen to receive this honor! 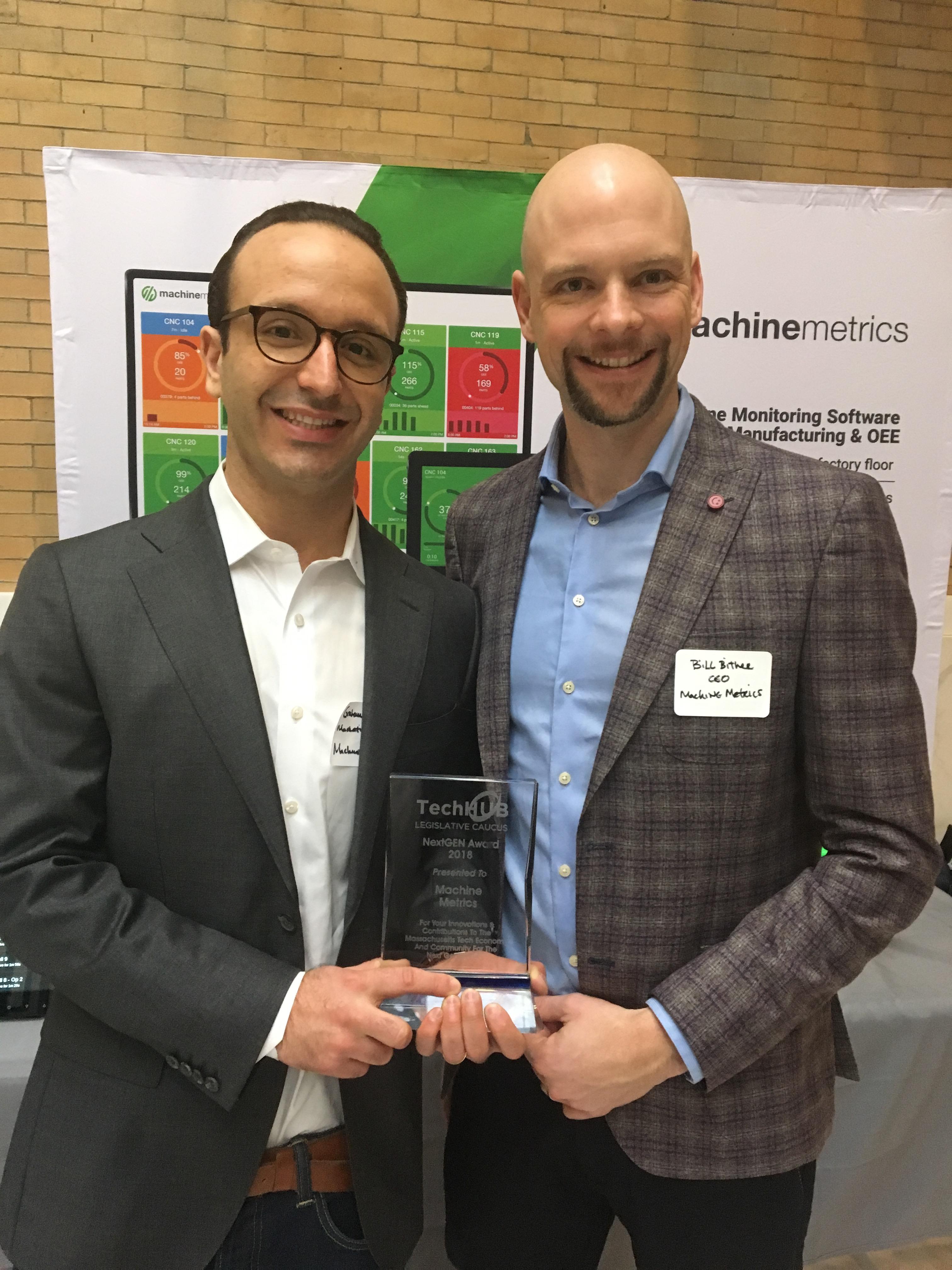 The event featured both in-state-tech companies and global corporations with a significant
presence and investment in Massachusetts. These companies are developing technologies and driving
innovation in areas including networking and communications, data analytics, robotics, autonomous
vehicles, smart communities, wearable technology, and digital health.

Tech is one of the state’s strongest economic engines. According to the Massachusetts Technology
Leadership Council’s 2017 State of Technology Report, the sector today directly employs over 300,000
and an additional 100,000 employed in tech occupations in other sectors of the economy, which
including indirect jobs, underpinning 34% of all jobs in Massachusetts.

The inaugural NextGEN Awards winners were recognized for a variety of distinguishing criteria,
including: disruptive technology, rapidly scaling operations in Massachusetts, demonstrating best practices in diversity hiring, and having impact on a regional economy in the Commonwealth.

“Today was a terrific opportunity to explore what is possible thanks to the innovations of the businesses propelling Massachusetts forward,” said TechHUB Caucus co-chair Senator Karen Spilka (D-Ashland). “The winners of the NextGEN awards are transforming the future of technology and driving the next generation of economic growth.”

“We appreciate the opportunity to host a discussion with tech leaders and public officials here at the
State House,” stated Representative Ann-Margaret Ferrante (D-Gloucester), TechHUB Caucus co-chair.
“We are fortunate to have so much talent in Massachusetts, and the tech community is driving trends
that are making a positive impact on our communities. I look forward to continuing an ongoing dialogue
that will foster an even stronger innovation economy here in Massachusetts.”

The TechHUB Caucus is supported by a Working Group that includes: Dell, Google, MassTLC, TechNet,
the MassTech Collaborative, Microsoft, MITX, and Verizon.

“The TechHUB Caucus plays a critical role in bringing together innovators from around the
Commonwealth with policymakers, helping forge a deeper understanding and openness between the
two groups,” said Tim Connelly, CEO/Executive Director of the Massachusetts Technology
Collaborative, the public economic development agency tasked with growing the innovation economy in
Massachusetts. “Innovation Day at the State House is a great event where we see this dynamic in action.
It’s a prime opportunity to ask questions, get hands-on demos, and to hear from the tech sector about
innovations that are just over the horizon.”

“Massachusetts is fortunate to have a thriving innovation sector. A strong ecosystem of innovators –
from startups to large enterprises – is revolutionizing how we live and work,” said Donna Cupelo,
Region President of Verizon New England.  “Verizon understands firsthand how important it is to foster
a culture of innovation that is driving trends and fueling economic growth for our state, our region and
our nation.”

The TechHUB Caucus, supported by the TechHUB Policy Working Group, brings together various private
sector technology executives and trade associations around efforts to better connect with and inform
public policymakers about priority tech sector topics. The TechHUB Policy Working Group is a project of
the TechHUB Collaborative, an industry-led stakeholder group supported by the Massachusetts
Technology Collaborative, to serve as the nexus for industry, academia, and state government to discuss
and advance priorities for growing and strengthening the Commonwealth’s tech sector.

Kepware vs. MachineMetrics: What’s the Better...
Kepware has long been synonymous with industrial connectivity. Having been founded in the mid-1990’s, they have successfully helped connect a large variety of industrial equipment across a wide range of industries, giving a multitude of engineers the tools to successfully roll out M2M projects. However, with the onset of Industry 4.0 and advancements in the field of industrial connectivity, new solutions have arisen to meet the growing...
data-collectionmachinemetricsmanufacturing-data / January 31, 2018

Yes, You Really Are Ready for Industry 4.0:...
Over the past few years, there have been many significant changes in the manufacturing industry. From a global pandemic to supply chain issues to worker shortages, challenges have never been greater. Not to mention, these challenges come at a time when demand is high and manufacturing is expecting robust growth over the next decade. Another significant change has been Industry 4.0, which has been a hot topic for manufacturers for...
industrial-iotmachinemetrics / January 31, 2018

Top 5 Takeaways - The Death of MES: A New Vision...
Recently, I had the chance to host a panel at IIoT World’s Digital Manufacturing Day with technology leaders from Fulcrum, UpKeep, and MachineMetrics. During the panel, titled The Death of MES: A New Vision for the Factory Software Stack, we challenged the standard approach to building manufacturing operations systems. [Watch the recording] Our proposition is that these broad, largely organizational solutions cannot achieve the depth...
machinemetricsdeath-of-mes / January 31, 2018 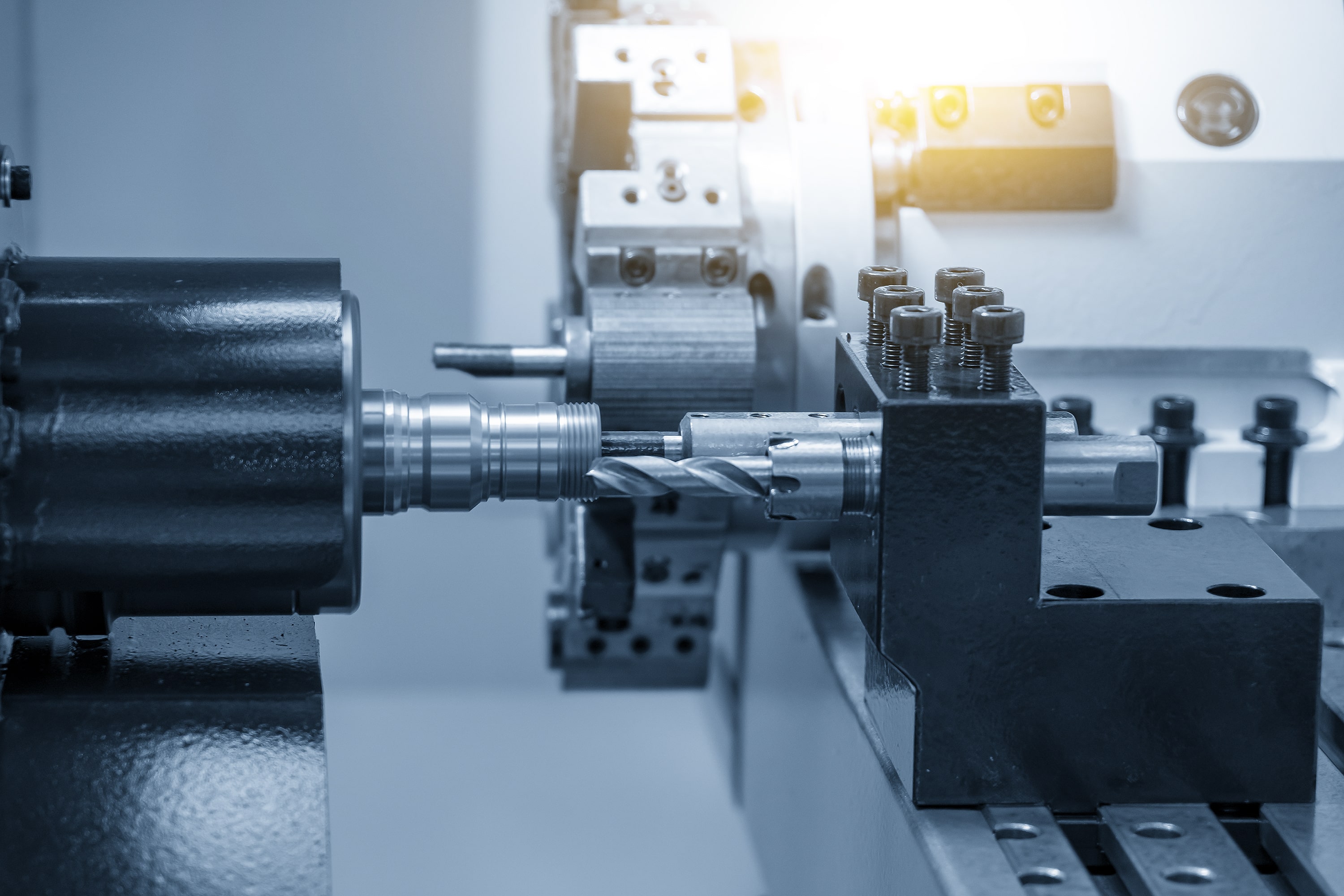 Manufacturing Tooling Costs - A Complete Guide
With labor, transportation, and material costs rising in every manufacturing sector, companies are anxious to find ways to save money. For CNC machining, tooling is an additional, often unforeseen, cost that must be incurred as a part of the business. Developing a better understanding of the factors that play a part in tooling costs as well as learning how you can track the health of tools will help to manage a healthier bottom line....
machinemetricstool-monitoring / January 31, 2018

How to Reduce Tool Failure with CNC Tool Breakage...
Tool breakage has always been a challenge for machining operations. These breaks can occur during regular machining cycles due to tool wear that eventually results in failure. They may also occur due to improper settings, human error, equipment malfunction, or for a variety of other reasons. When tools break, costs pile up. Downtime means fewer first-quality pieces and potential missed deliveries. It also drives up labor and materials...
machinemetricstool-monitoring / January 31, 2018 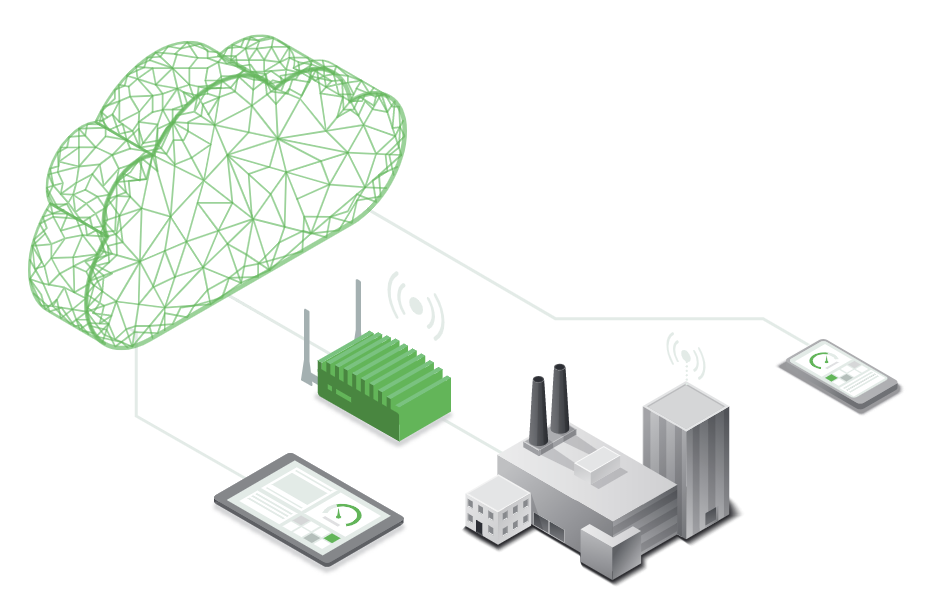 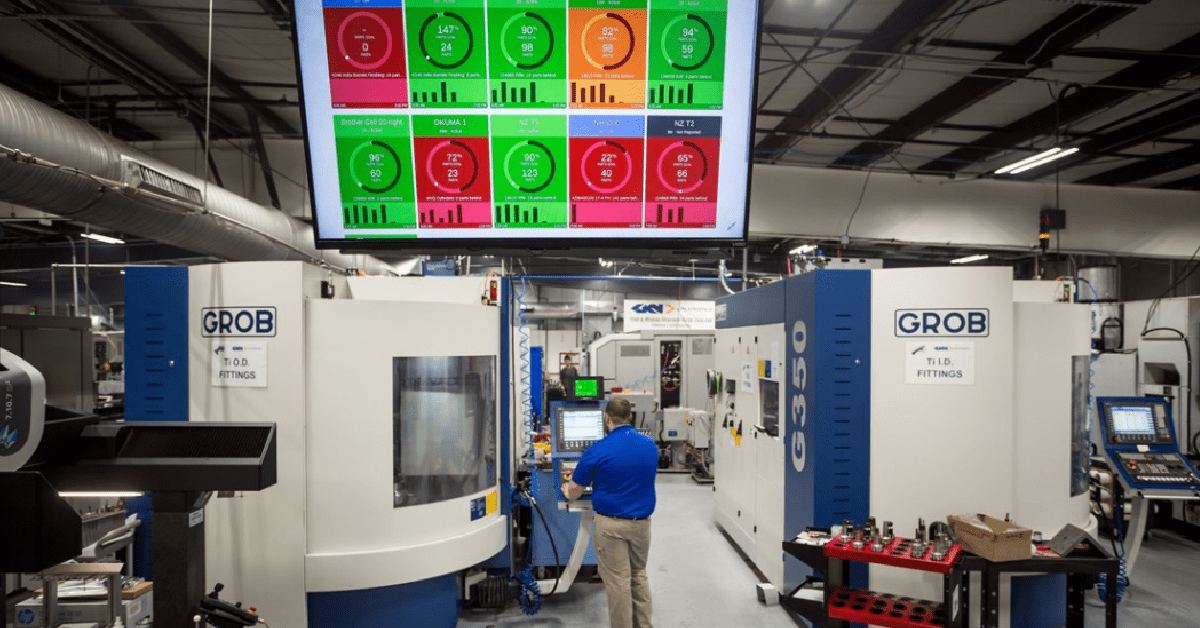 The Impact of Production Display Boards on the...
Have you ever heard the expression "out of sight, out of mind"? Sometimes ignorance is bliss. But in manufacturing, being out of sight and out of mind may mean losing focus on shop floor activities, and falling behind production goals. Manufacturing has traditionally used visual tools to keep employees focused on production. And anyone who has been in the industry remembers the whiteboards, grid boards with tape and string, clipboards...
dashboardsmachinemetricsshop-floor / January 31, 2018 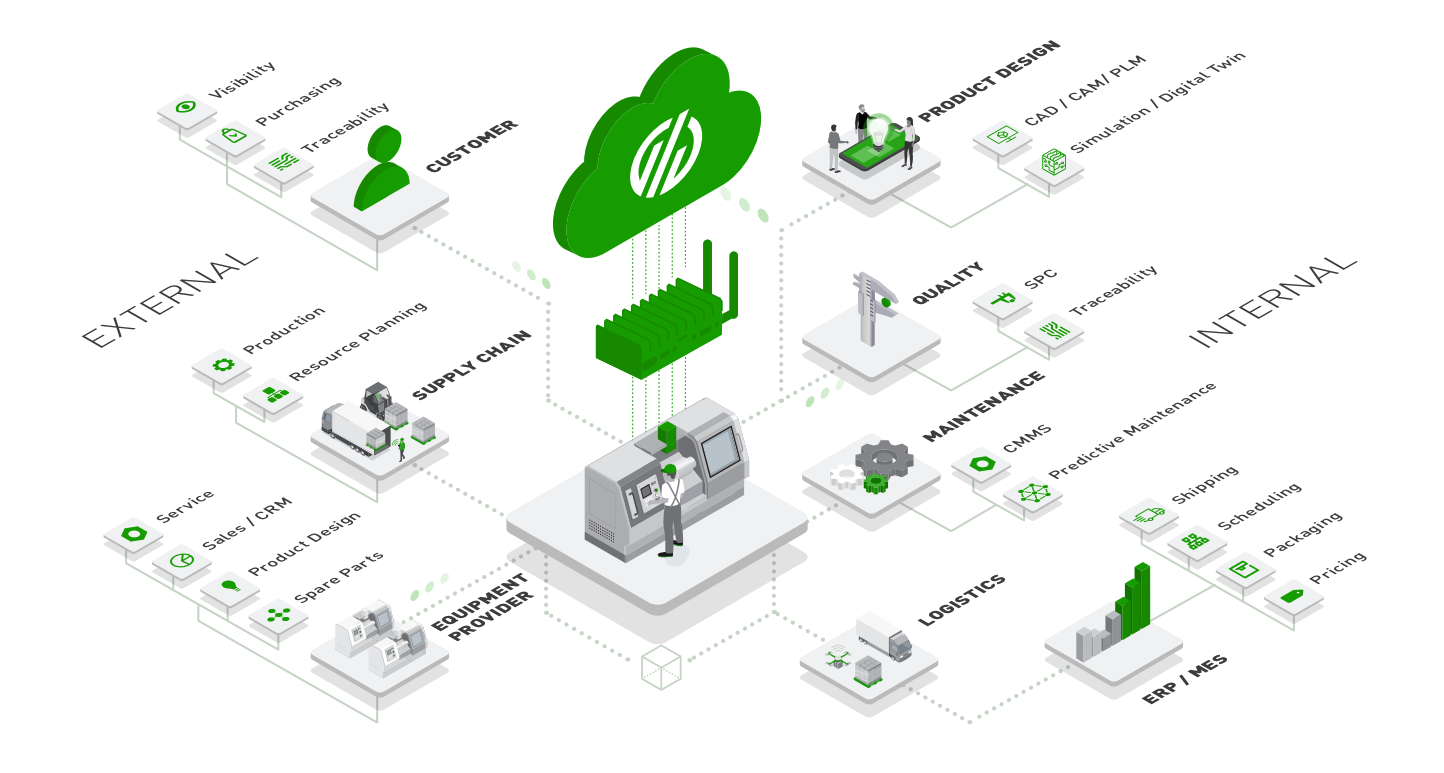 Building a Best-of-Breed Tech Stack in...
Manufacturing leaders today are having an increasingly difficult time choosing software that meets their ever-growing needs. Traditionally, manufacturing operations would use an ERP/MRP system that was designed for their facility, and fill in gaps with Microsoft Access, Excel, or paper. These systems require a lot of maintenance, manual data entry, and usually a team of consultants to implement. ERP systems have attempted to solve...
machinemetrics / January 31, 2018

EASTEC 2021 Takeaway: Digital Transformation is...
If I've learned anything from the recent return to in-person events, it's that nothing can match the energy and depth of insight gained from face-to-face interactions. At EASTEC, I spent three days speaking with local manufacturers, suppliers, and customers, and it is clear that the urgency to embrace shop floor digitalization has arrived. Over the course of the pandemic, manufacturers have navigated volatile market conditions leading...
machinemetrics / January 31, 2018

What is Tool Life? How to Optimize Tooling with...
The expense of tooling combined with scrapping defective parts makes extending tool life an important objective for metal cutting companies. Traditional machining relied on settings determined experimentally to determine the life of a machine tool. Operators could log part counts until a tool failed or began developing out of spec parts. The average of these part counts could be used to establish a threshold for the life of the tool....
machinemetricstool-monitoring / January 31, 2018
See All Posts
Popular
8 Wastes of Lean Manufacturing | MachineMetrics
Emerging Industry 4.0 Technologies With Real-World Examples
OEE, OOE, and TEEP - What's the difference?
Takt Time vs Cycle Time vs Lead Time | Definitions and Calculations
5 Lean Techniques That Will Improve Your Manufacturing Processes
Categories
see all
Get In Touch With Us